The year 2020 was unprecedented in many respects, so it’s completely natural that humanity turned to many different ways to keep its sanity. We saw the revival of many “forgotten” hobbies and techniques, one of them being nurturing natural cultures for purpose of bread baking.

Social media was overrun with the images of great looking bread loaves, and this really intrigued me considering I dabbled a bit in bread baking earlier in my life. However, the technique of using “only flour & water” sounded very strange to me, and, honestly, my bread never, ever looked like THAT.

So, what’s it all about?

# Nature at its finest

It comes with no surprise that the sourdough concept is really an old one. Wikipedia lists 3700 BC (opens new window) as earliest known occurrence, but it could very well be that the fermentation process is much older than that. Someone probably noticed at some point that the leftover dough naturally ferments and that using it as a leavening agent results in some tasty bread.

What came as a shock to me was that this has been a widespread knowledge until about 100-150 years ago, when the industrial yeasts took over and became the staple of the bread baking all around. This was true for in my origin country of Serbia as well, but somehow I never heard about it. It was ingrained in my mind that you had to have some yeast (either fresh or dry) at hand in order to make some bread. Little did I know...

When I first moved to the UK, the only homemade looking bread I could find was some sourdough bloomer in local grocery store. But, it was seldomly available and by god it was extremely sour! This was probably why it did put me off a bit at first, and looking back now I would never suggest it to someone to try as their first foray in this kind of bread.

However, I did notice that aside of its very acidic flavor, it was relatively natural looking and could last for a really long time. It also didn’t go bad in the same way as regular bread: it never accumulated any mold and would only dry out and become a stiff brick at some point, nothing too dramatic.

Then the lockdown came, and I saw it pop up all over the place! One of our friends gave us the first taste of homemade sourdough bread, and it was much more palpable than I imagined. There was finally some proof for me that it was perfectly feasible in a regular kitchen.

We managed to arrange getting an offshoot of the sourdough starter a friend initially got from another friend, in form of a very nice present that included also a jar of different kinds of flours and some seeds. We also got a very nice recipe (opens new window) to go along with it, so everything was in place for the first try. 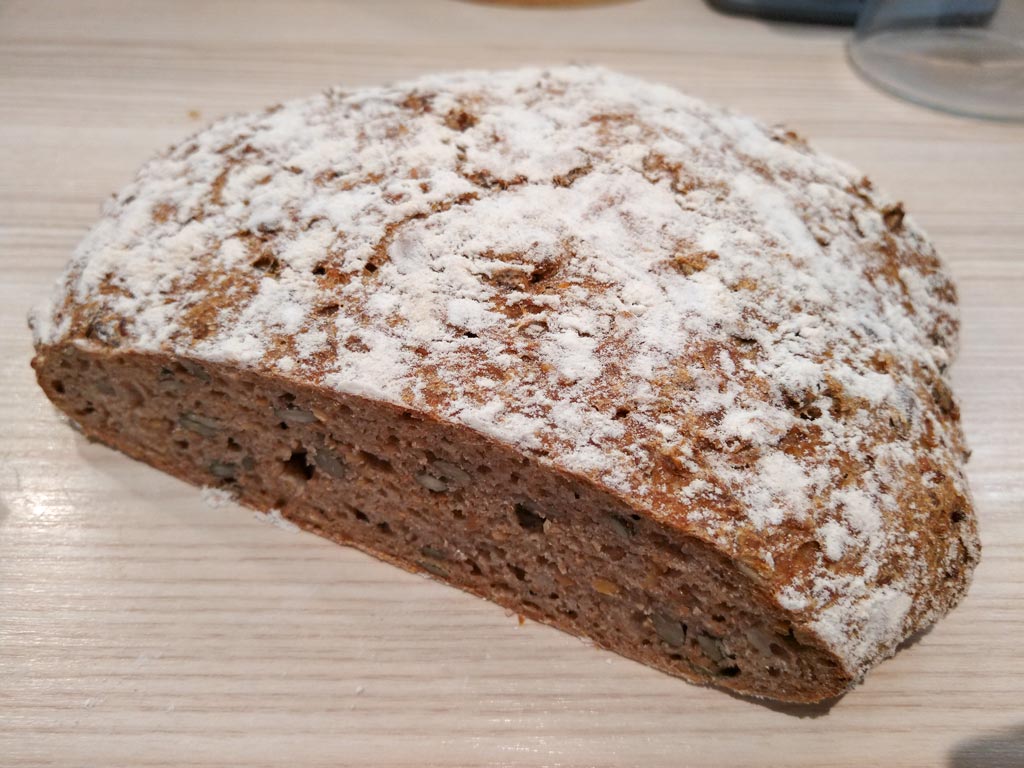 Following the recipe was relatively straightforward, but it turned out a bit unexpected. As I found out later, the high hydration of the dough coupled with mixing of all ingredients at the same time resulted in a flat pancake that looked like anything but the good looking bread I saw on other people’s feeds.

The recipe also included instructions in keeping part of the dough for later endeavors, so we gave it a few more tries and tried to remedy the problems I encountered as we went. Purchase of a silicone mould (opens new window) did remedy the issues with the structure a bit, but it was also not a miracle I was hoping for. 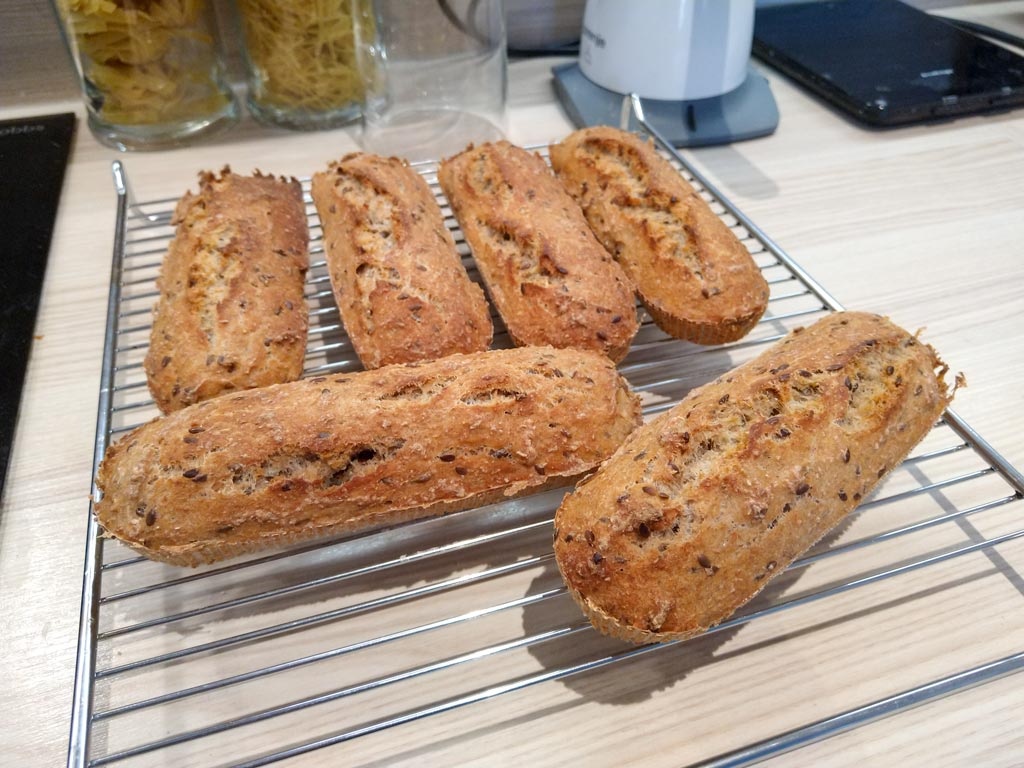 Don’t get me wrong: there was nothing really wrong with this bread per se. It just looked a bit off, but the taste was pretty good and we settled into baking it almost on weekly basis, in form of mini-baguettes.

At some point, I had just too much time on my hands so I decided to look more into this topic. I found an excellent guide (opens new window) in creating your own sourdough starter from scratch, so I bought couple of missing materials and just went for it.

The entire schedule I had in the first 8 days is given in the table below. Note that I did change it a bit, based on the available flour at that moment and general feeling I had toward its growth: 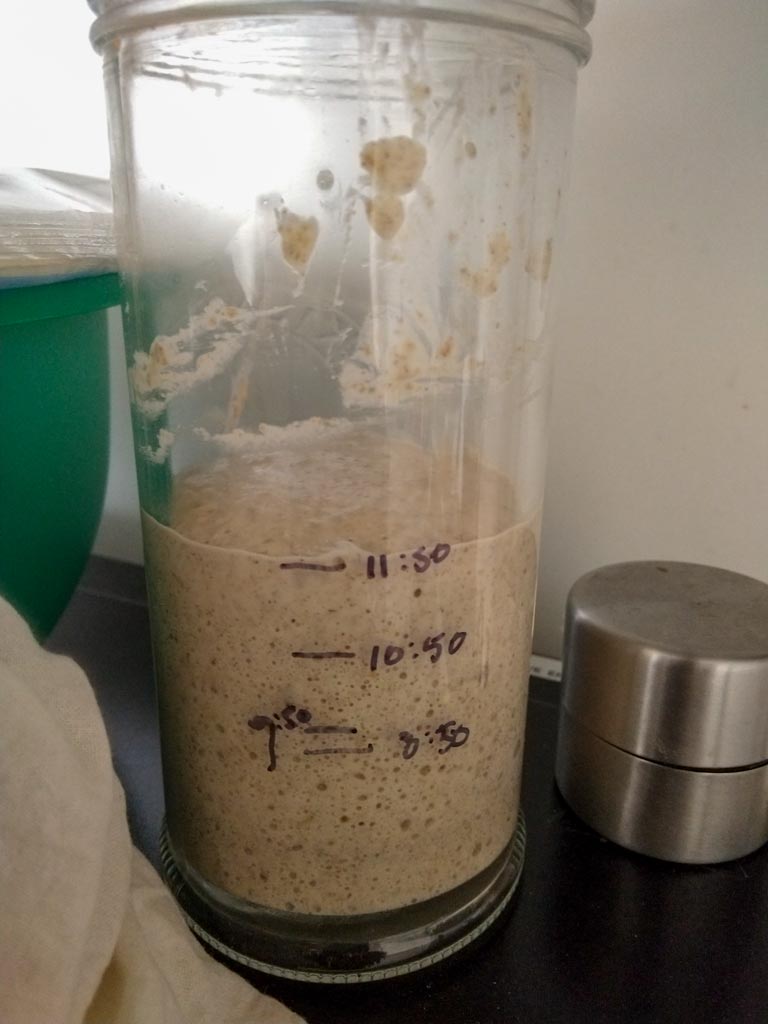 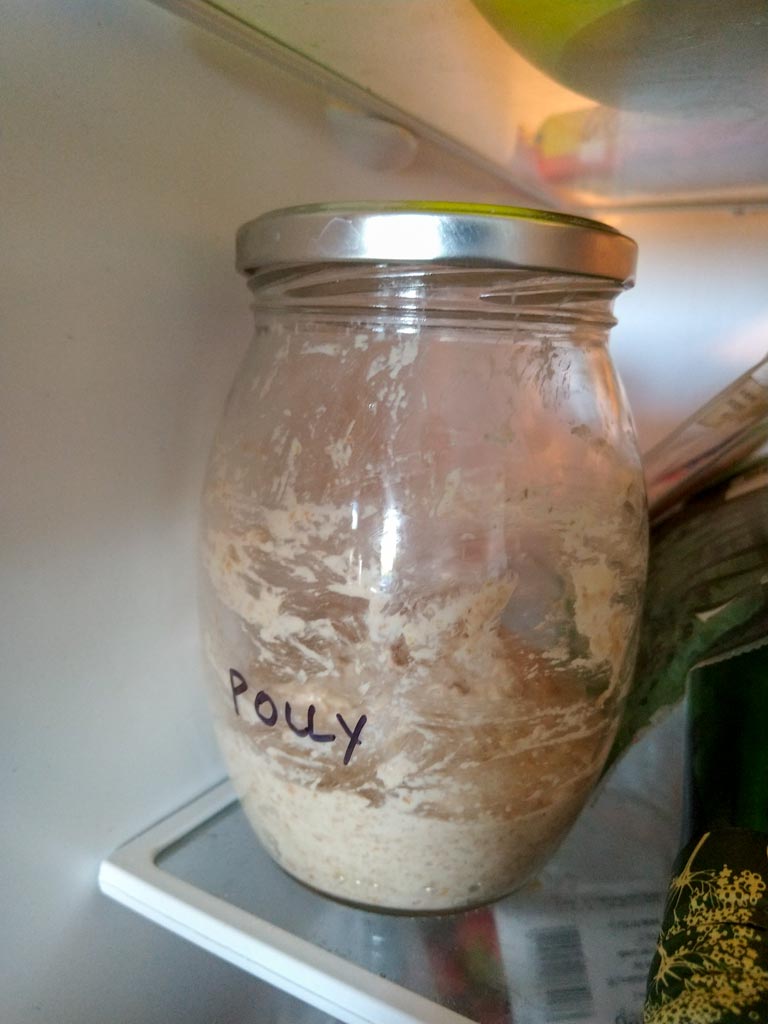 Finally, I had another starter with predictable rise & fall after each feeding phase. After suitably naming it, I settled into a weekly schedule where I would:

First foray into baking bread with the new starter was a very different experience. I went above and beyond to follow this beginner’s guide (opens new window) to the letter, hoping it would pay off. 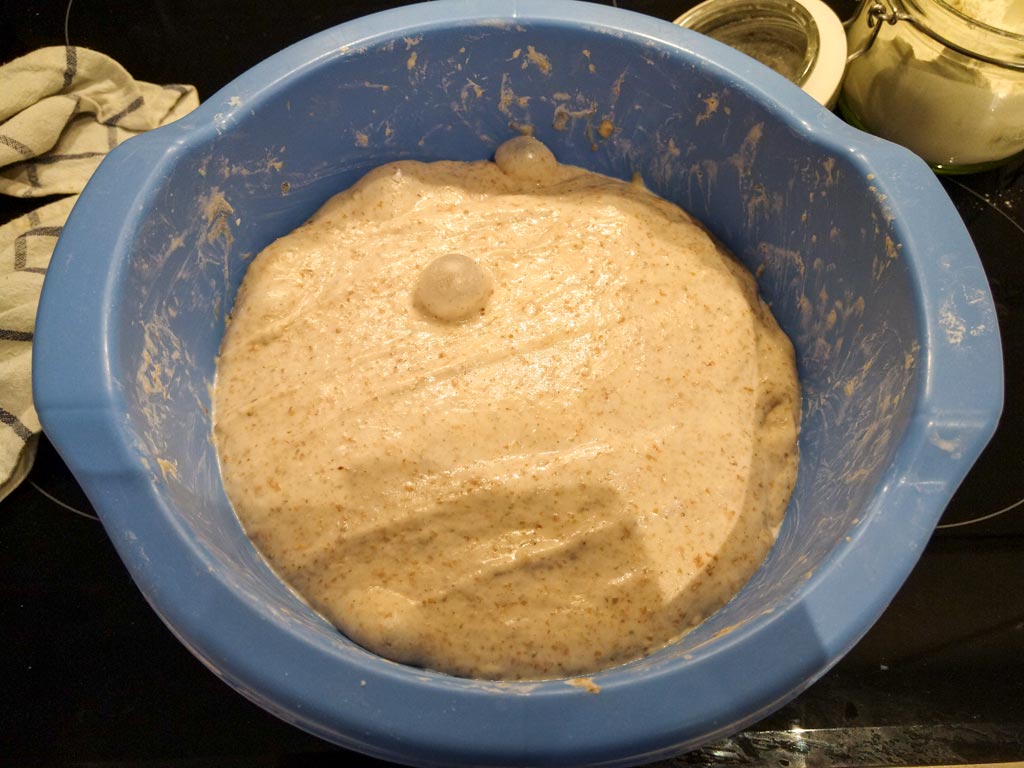 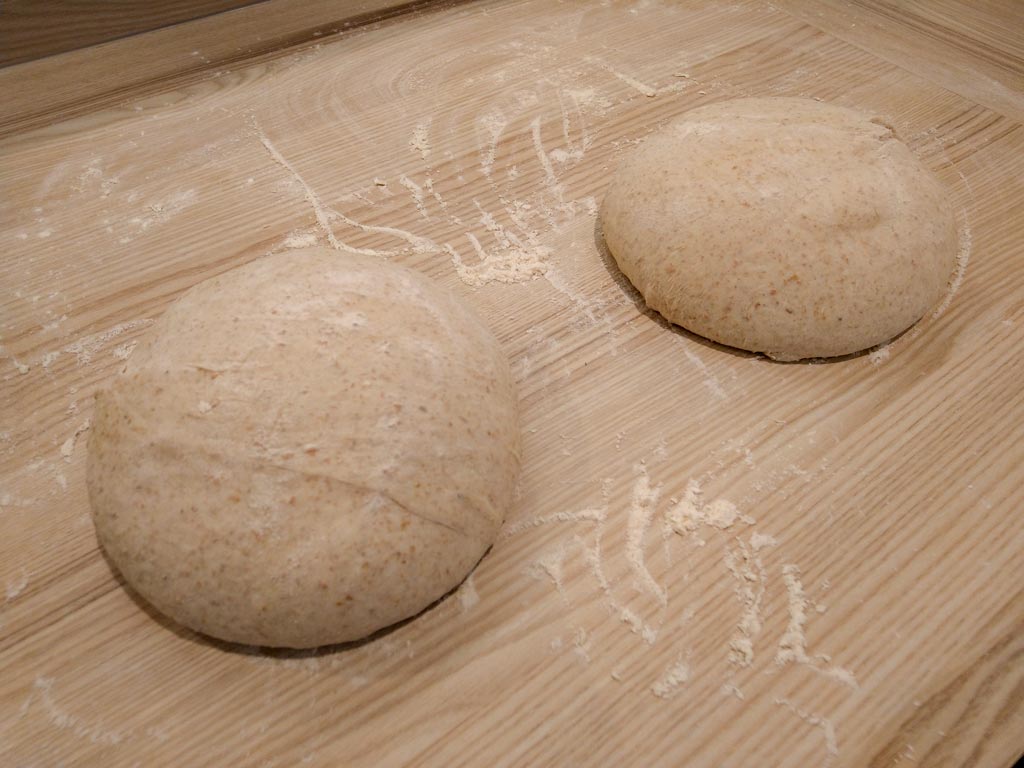 From keeping tabs on the temperature throughout the process, over a very complex time schedule, to using a cast iron dutch oven I had to get the full rise of the bread, it looked like everything fell into place. Granted, my kitchen started to look more like a laboratory, with precise measurements at every step of the way. 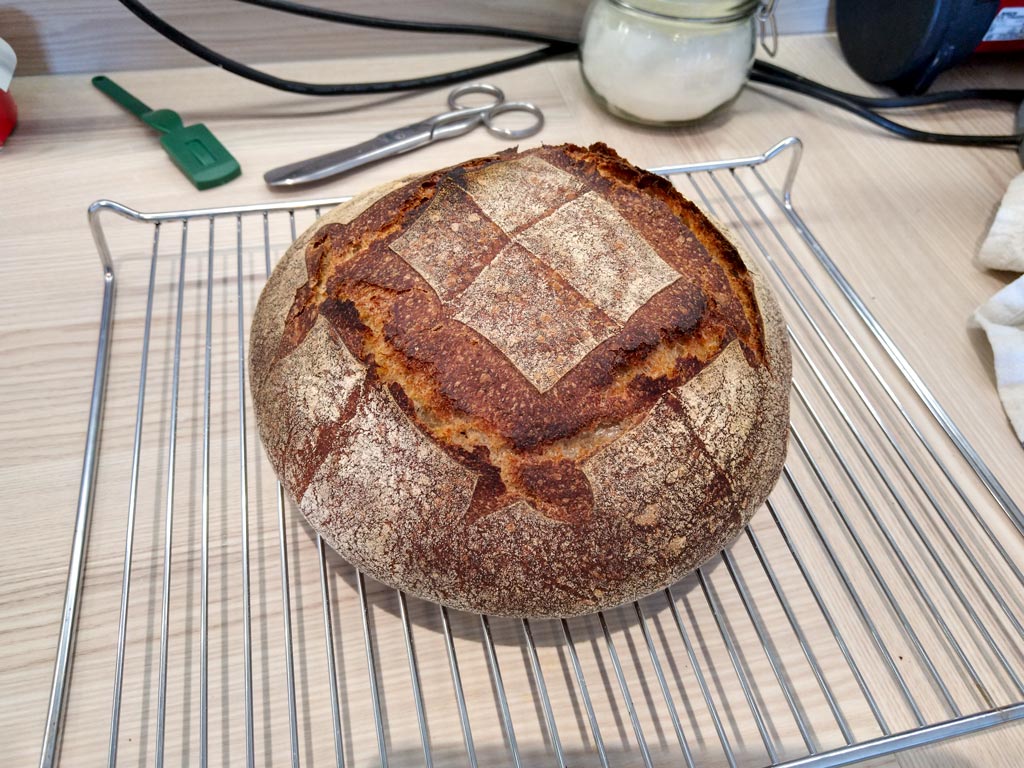 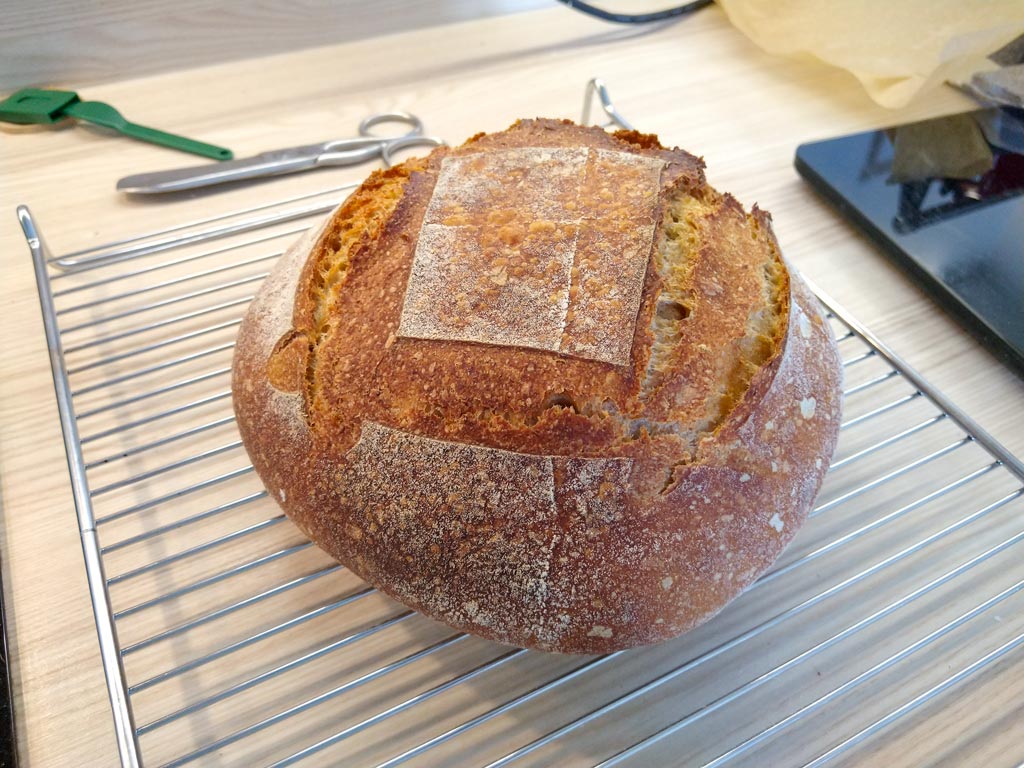 The difference was staggering. For the first time I had something Instagram worthy at my hands 😄

The two “boule” shaped loaves looked very much different to what I had on hands before. They looked perfect both inside and outside.

The taste was also very unexpected: texture was somewhat chewy, but with careful monitoring sourness was really at the bottom level, and I was very pleased. However, there were so many other recipes out there, that I decided to try some more before I settled for something that I would continue to bake regularly.

Obviously, first thing I wanted to experiment with was different flour mixtures and shapes. More wholemeal flour, less white, with seeds... You name it! 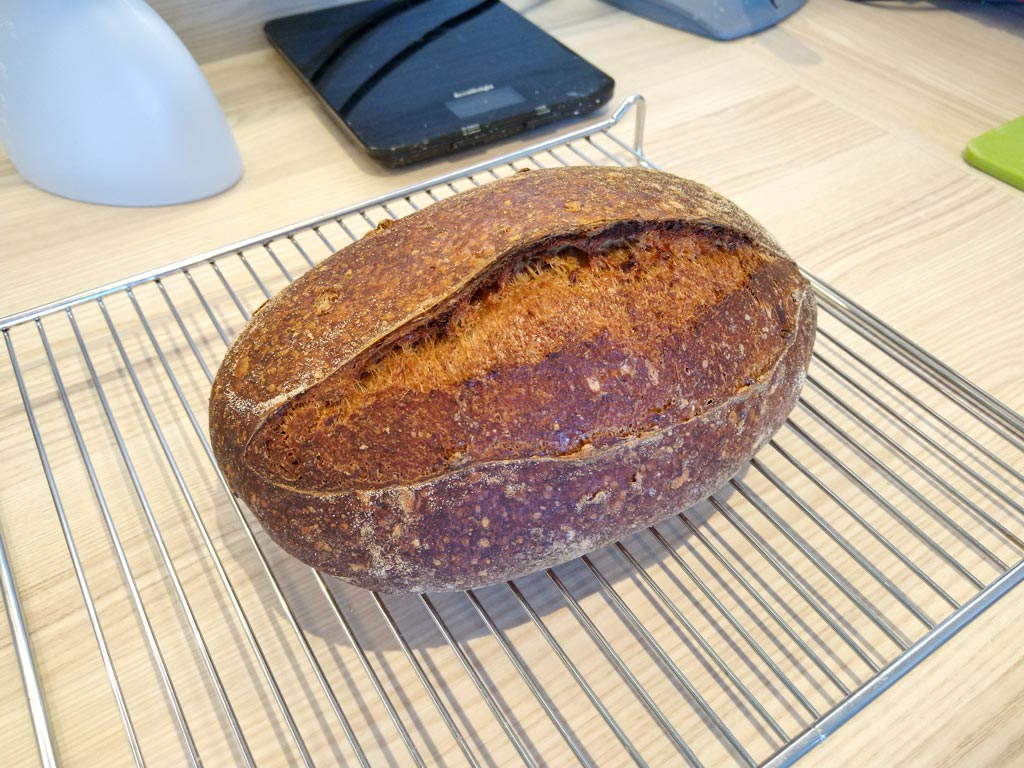 Batard (opens new window) proved to be a more complex shape for me, and I faced some difficulties along the way. High hydration dough is very challenging to handle and I struggled a bit before I had something to show for it. I had a slight feeling that the proofing of batard shaped loaf was a bit underwhelming, but the results told a different story.

However, in the end, the taste was at the same level as before, so I didn’t think this impacted the process in any significant way.

A loaf tin does provide some more structure to the bread, and I can attest for this. Results are also much more consistent along the way, and even scoring the bread (opens new window) is not needed in most cases. 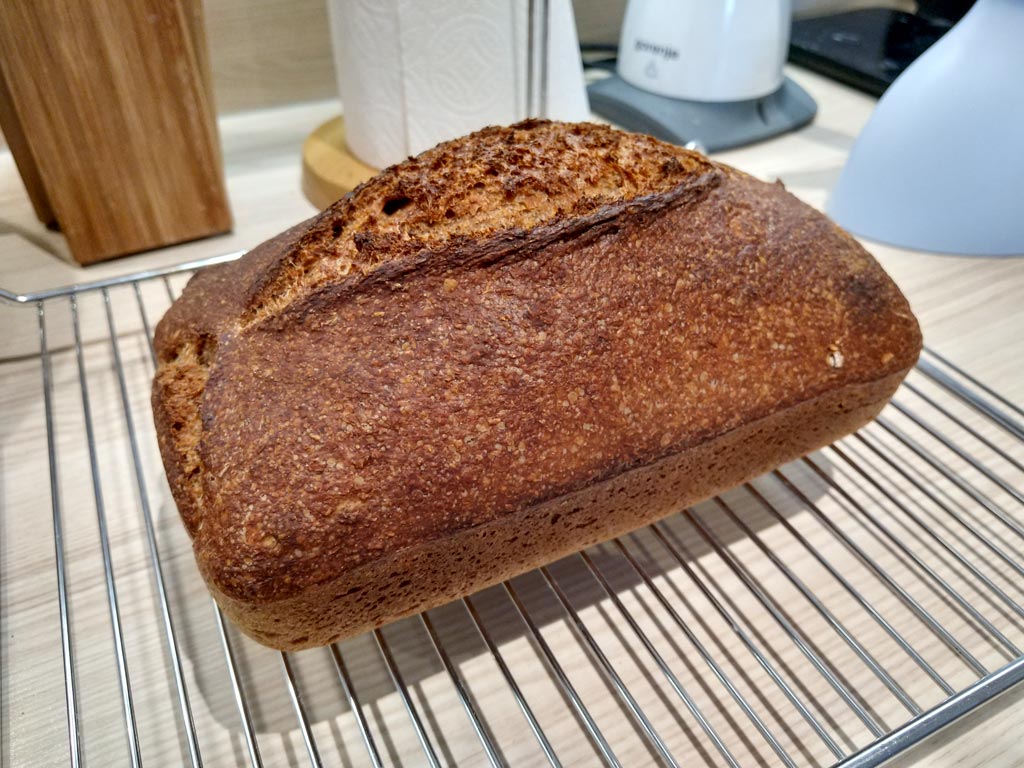 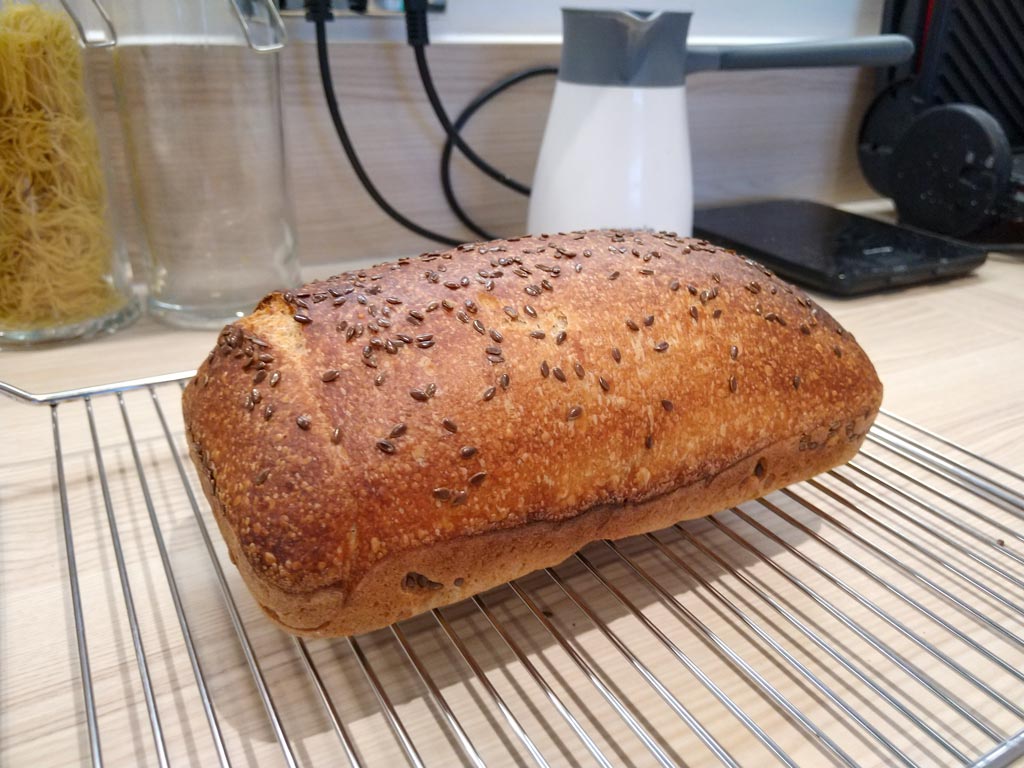 Rectangular shape is also very neat for cutting and sandwich use. I had an impression there is a lot less of the bread lost, and that it keeps its freshness for longer. This shape will probably be my personal choice from now on, but I will try to get some higher duty tins, perhaps made of silicone. I noticed that the steel ones rust rather easily.

Next in line were some other sourdough recipes I wanted to try. Pizza dough (opens new window) was obviously the next one in line, and it was very nice experience! 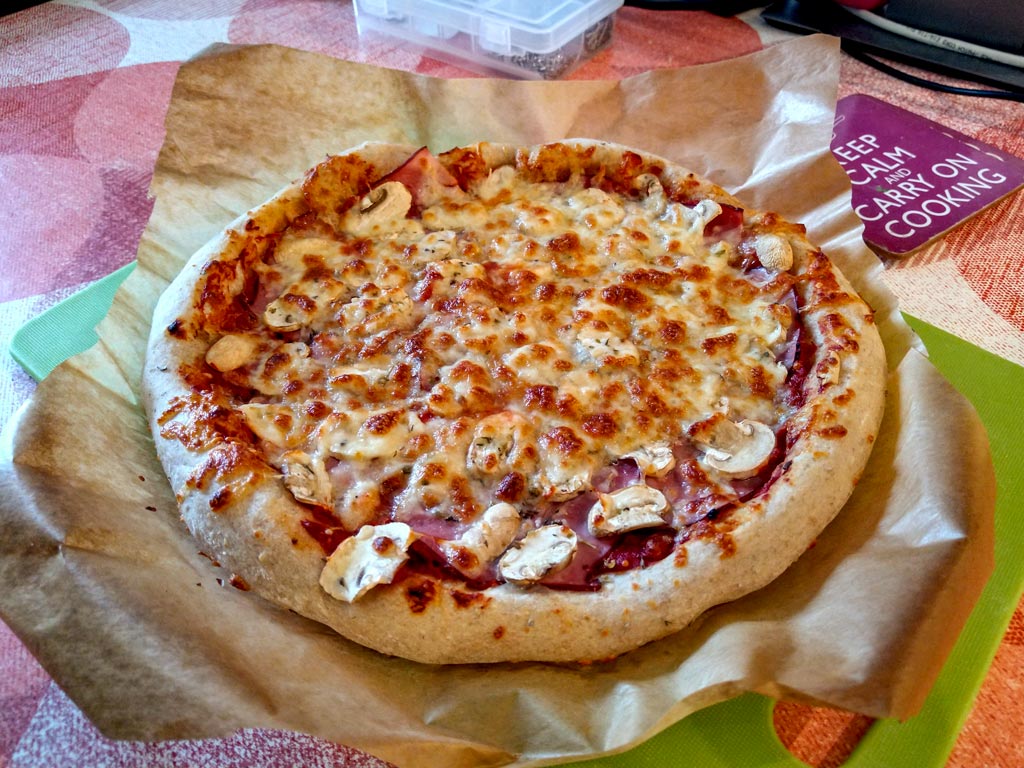 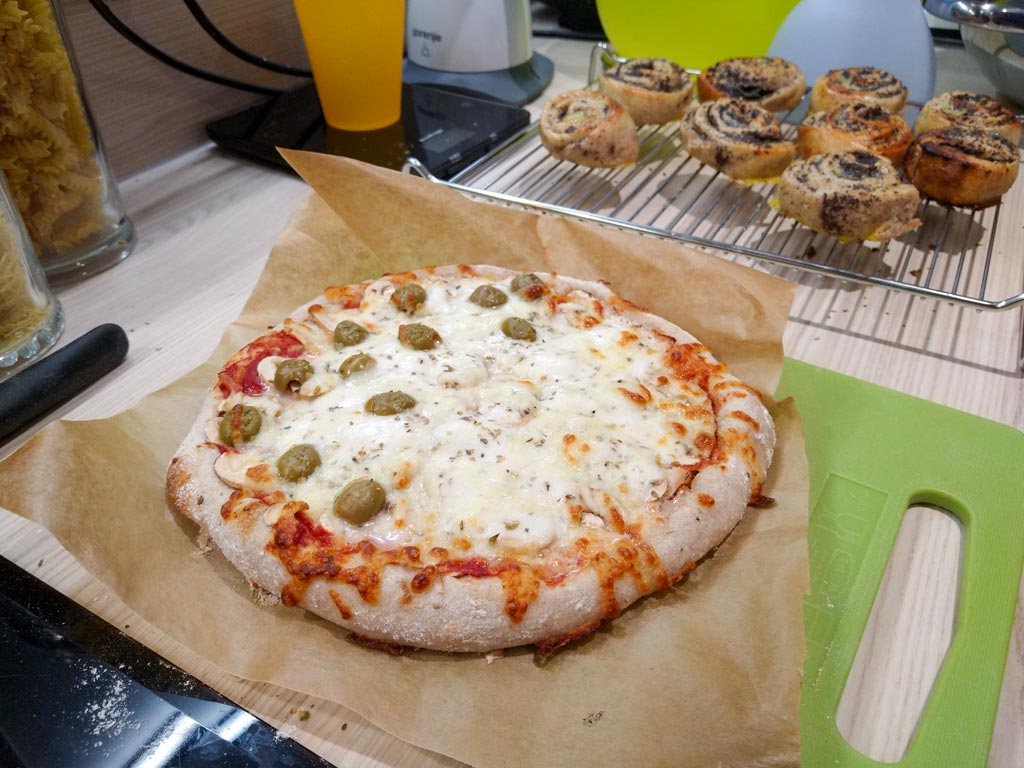 Sourdough pesto rolls (opens new window) were also on the menu, and the dough was, although not strictly bread, very tasty indeed. We experimented a bit with poppy seeds, and cinnamon is also on the horizon, as this recipe is very versatile: just use whatever spread you want! 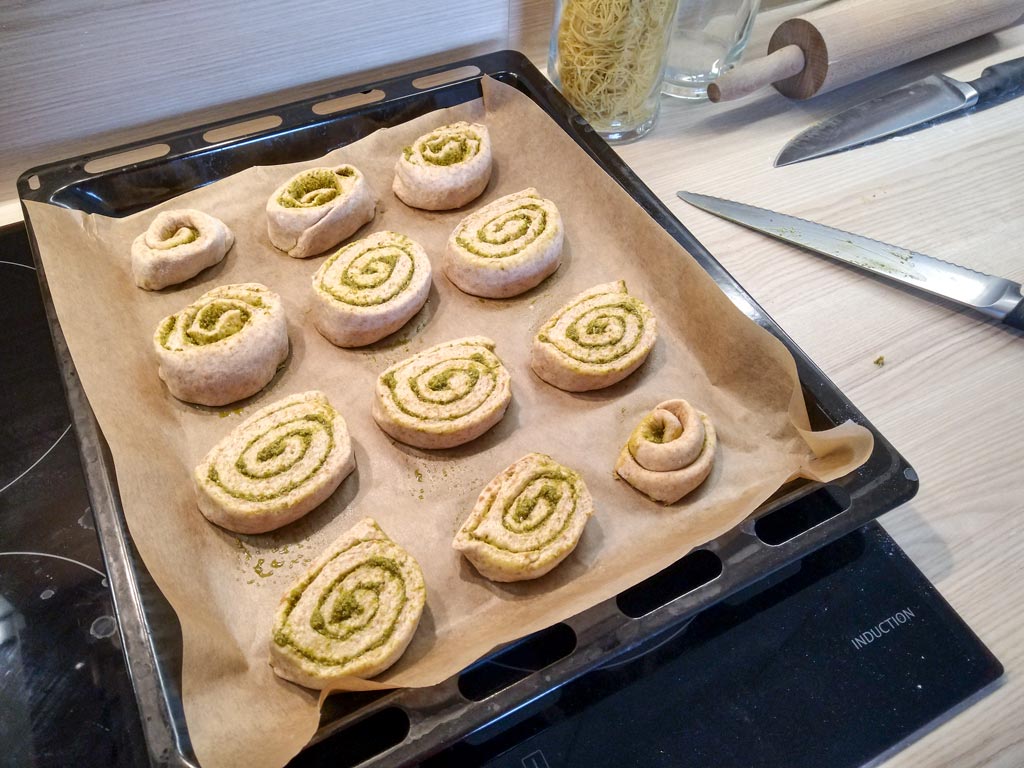 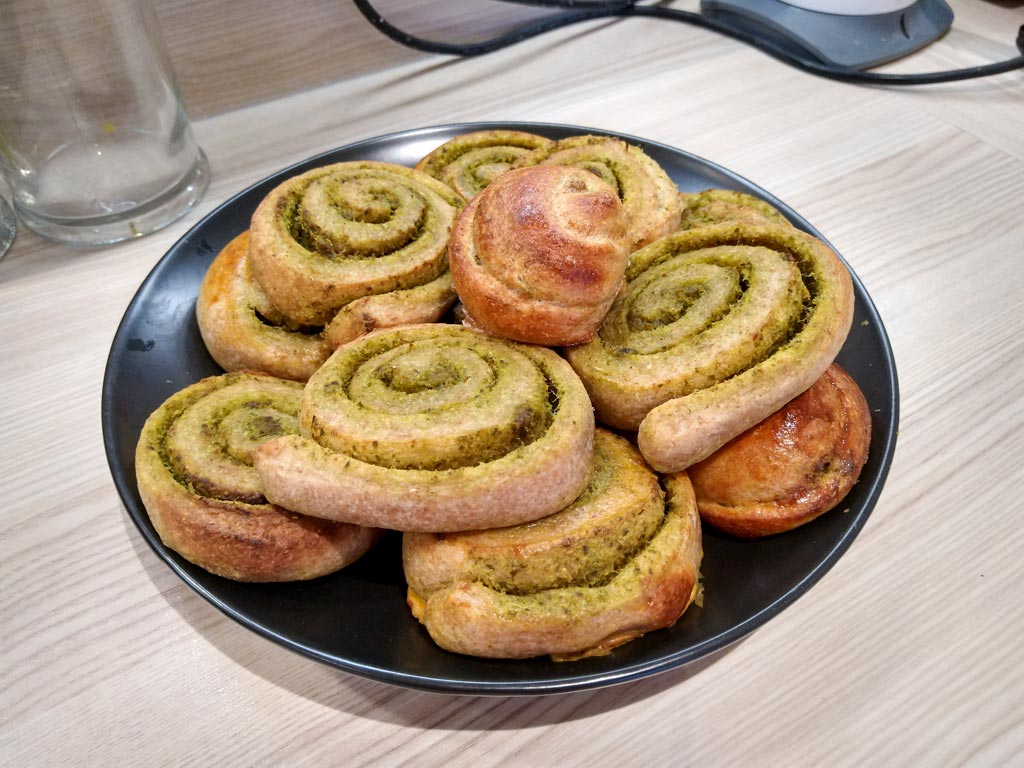 Not that there were no failures along the way too. I would NOT recommend you trying your hand at sourdough crepes, because holes & crepes do not go with each other 😬 Yes, they were tasty, but very difficult to make and eat.

First few times I used the dutch oven inside my fan convection oven, and results were very impressive. However, after some time I dabbled a bit at some other techniques, most notably oven steaming (opens new window) and it proved to render very similar results, at quarter of the previous effort.

I still use the dutch oven lid for some stuff, it is very good for the heat retention in pizza baking. But since it’s cumbersome to handle, I was very pleased to be able to take it out of the equation in most instances.

I will probably go ahead and purchase a quality proofer for the future, since controlling the temperature proved to be the only thing I still have trouble with. With it I hope to be able to continue making consistent dough even in colder/warmer days, without any extra steps.

Hopefully, my enthusiasm for sourdough doesn’t wan when the pandemic ends, but I think it probably won’t if I make sure to optimize every step of the way and make it my routine.