While researching self-signed S/MIME certificates for Gmail in a previous post, an idea came up to my mind to also try if PGP encryption would work in a similar way. Good news is: it’s even more easy to set it up in Thunderbird, considering you can do everything via GUI!

# Why is it not natively supported?

As Gmail and other bigger free email providers mostly target enterprise with their encryption features, it was probably never an option to support a free standard such as OpenPGP. The issue probably lies in the lack of identity verification, which is almost non-existent for the PGP mechanism. It is actually assumed that you as the email account holder would generate both your public & secret key on your own, and there is never a third party service involved in the whole chain. (Unless you count the key server distribution as such a service, which you could argue for, but it’s not really the same thing.)

Since Gmail and Co opted for the S/MIME certificates as their encryption of choice, you will probably never see this natively supported. For sure, S/MIME is normally a safer choice, but for personal correspondence it’s probably overkill. Additionally, some people are stuck in the past so sometimes you have no other choice than to resort to PGP for encryption.

The process to generate your own OpenPGP keys is pretty simple. All that you would need is:

This guide assumes you already have your Gmail account setup in Thunderbird. It can be either via IMAP or POP3 protocol, it doesn’t really matter. In case you are having trouble with this, check your settings in the Gmail web interface, and make sure the desired protocol is enabled. You can then use the new account wizard in Thunderbird for connecting your account and authenticating via OAuth2.

Next, make sure Create a new OpenPGP Key is selected, and click Continue:

Make sure correct Identity is selected (it should contain your name and your email address). For Key expiry you can either chose an expiration date, or opt out for non-expiring key. Make sure to increase the Key size to 4096 and then press Continue: 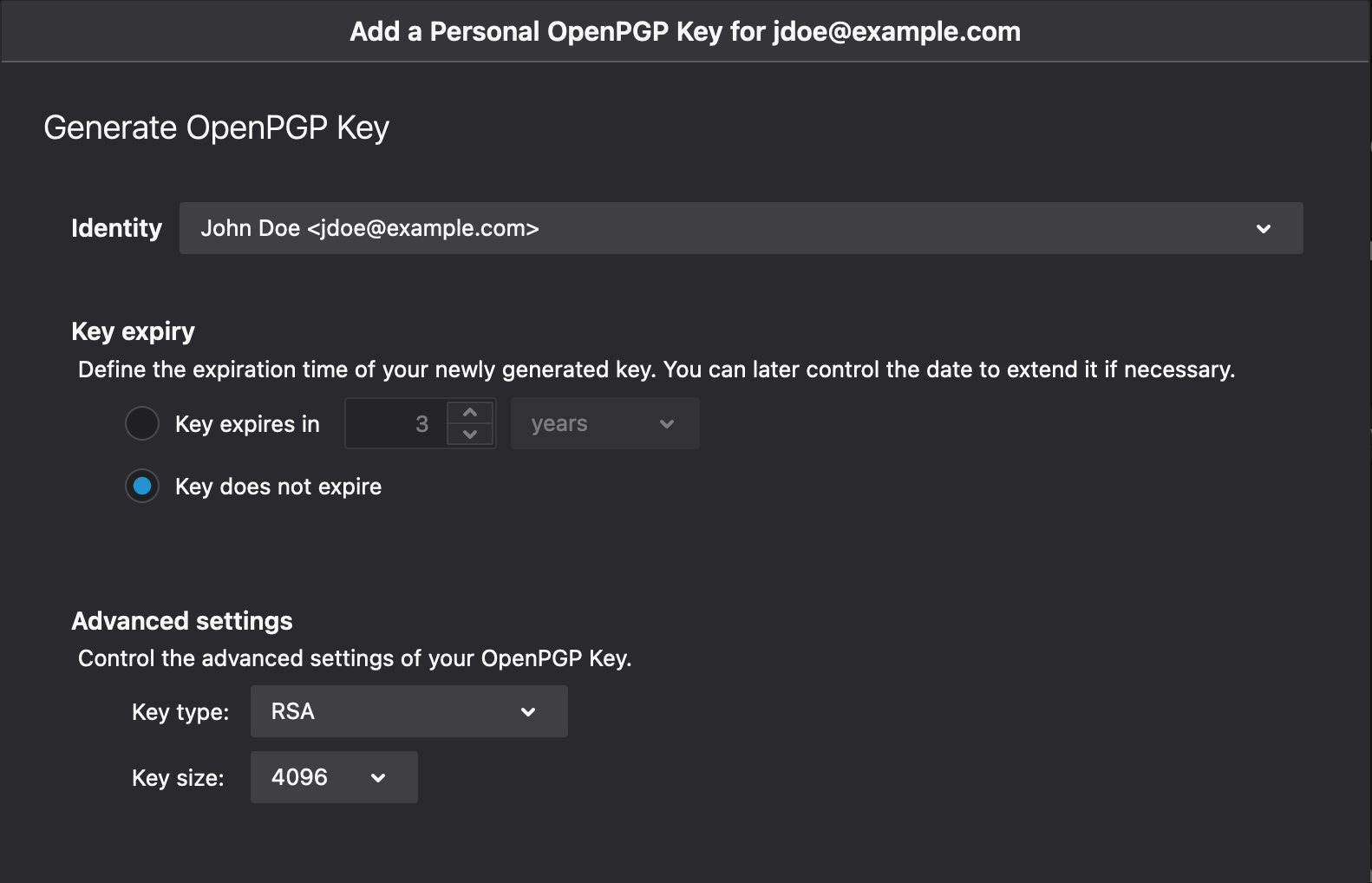 On the last screen of the wizard, just press Confirm and wait a bit. You can probably speed up the process by moving your mouse, scrolling around or performing some disk-intensive background operation, since it increases entropy.

At the very end of the process, you will be back in the Account Settings screen, and the new key should be pre-selected for your account.

As a last step, please take care to backup your keys for future use. First, backup your secret key by going to the OpenPGP Key Manager, selecting your key in the list, and clicking on the File > Backup Secret Key(s) To File. You will need to choose a backup password and confirm it. Similarly, you can backup your public key by clicking on File > Export Public Key(s) To File.

Just fire off the write email button, and choose the Digitally Sign This Message option from the Security toolbar button. In case you don’t have the S/MIME mechanism set up, the Encryption Technology will default to OpenPGP for you automatically.

Make sure the email is being sent out from you email address. For signing messages, the recipient does not have to have their PGP key set up.

You can also just save a draft of the message, and check if it’s signed correctly without actually sending it. Look for a small sign badge in the upper right corner of the message preview, for a confirmation that signing was successful.

To properly test the encryption with the key you just generated, you will need access to a second email account. To encrypt for the first email address, you actually need to add that address to the recipients (not the sender!).

Similarly to the signing, you can write a message and activate Require Encryption option from the Security toolbar button.

Saving the message as a draft will do the encryption for you, and you can check for confirmation again in the message preview header, where a suitable encrypted badge will be shown.

Full test can be pulled off by combining both options (Digitally Sign This Message and Require Encryption), but you need to understand it will be impossible to test both the signature and encryption with the same key. They are mutually exclusive, since you will always be signing only messages from your, and only incoming messages will be encrypted.

However, in case you have access to another email account that has its own pair of keys set up, you can at least simulate signed & encrypted conversation. In that case, messages will be marked with a combined badge in their preview header.

Although it’s not available for the web interface, approach outlined above is a viable way to have a PGP encryption workflow integrated in Gmail or other email services. Especially if seldomly used, in case of some sensitive correspondence.

With keys backed up, you can also use them on other systems, for example on Android via a suitable app (warm recommendation for the FairEmail (opens new window) app, which supports PGP encryption, although as a premium feature).