HINT: To interact with the object VR of the assembled panoramic head above, simply drag your mouse cursor left/right over in order to rotate it.

While working with my quick-n-dirty panoramic head, I encountered several problems which made shooting panoramas difficult and slow. Of main concern were the problems with camera stability and parallax errors.

Stability was impaired by the lack of strength of material my flash brackets were made of. Camera took several seconds (!) to stabilize when rotated, which just added to the time necessary for entire panorama. Also, I noticed banding of the brackets when I started using much heavier 12-24 mm ultra wide zoom lens. L bracket was not perfect L anymore, which was bound to induce errors in final stitching.

Parallax errors were most frustrating ones, since they could only be corrected in image processing program. Errors were induced because the rotation of the camera was not done around the exact center of the lens’ entrance pupil, as intended. This occurred because every time I removed the camera from the head, I lost the setting for this pivot point which lies on camera’s optical axis. Since it was too much hassle to measure it every time before shooting, I was satisfied with approximate setting, which led to consistent number of errors.

Buying new head was my primary choice, but after seeing the product from Manfrotto, and their realization, I was a little sceptic. It looked very fragile, with lot of knobs and dials, which was bound to make using the head difficult. High retail price ($600+) was also a problem, as was the availability of the product in my place (there wasn’t any 😃 ).

Then I turned to making myself a professional VR head. I looked at how my friend (Vladimir Nenezic (opens new window), professional photographer) solved the problem, and I liked what I saw. He used original products from Manfrotto for parts that he couldn’t make himself right (primarily panoramic head 300N). Then he made the L bracket and pieced the parts together to make excellent custom made head he was familiar with and he could use very fast.

Then, my other friend (Nenad Filipovic (opens new window), an engineer), made his version of the head, by using smaller number of Manfrotto parts (particularly one less 357 quick release plate adapter). Result was lighter and more compact than the other. Rather than making my own head from scratch, I decided to use the measurements from his head, and make a few adjustments for my needs.

Since my friends head was built for larger Canon EOS 10D, I paid special attention to the size of the head. On friend’s advice, I finished with measurements which could accommodate, both smaller body (my EOS 350D) and larger body cameras. This proved to be very smart move, since I upgraded my camera in the meantime.

The plan was almost the same: one sturdy L bracket for azimuthal rotation, which would have additional altitudinal rail for camera mounting. Both this L bracket and altitudinal rail would be incorporated in a quick release system, which will enable me to precisely determine correct pivot point. For materials primarily brushed aluminum was planned, plastic was intended only for a small disc in screwing system, which would add the friction and make everything nicely tight.

After a paper sketch, final blueprint (opens new window) was done in Illustrator, and you can download PDF file from this link.

Next, I needed to acquire several products from Manfrotto for the head, since these would be very difficult to make, and could not achieve same precision as their retail counterparts: 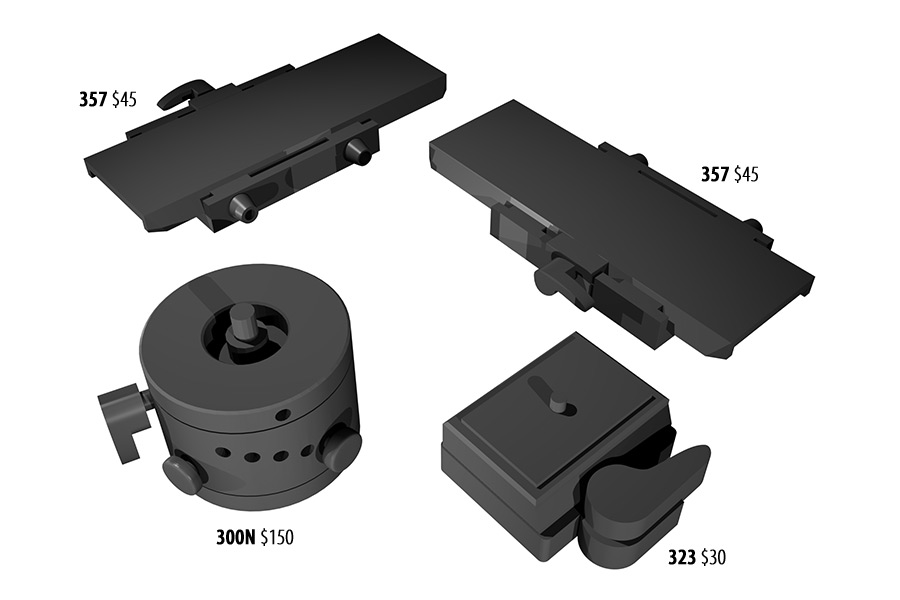 The problem I encountered was the lack of the availability of these parts at my place. For example, local distributor only purchased two pieces of 300N rotator, and both were already sold (btw. I knew both persons which purchased these 😃. So I had to buy them from abroad, and since it’s very difficult to have something shipped to my country, I asked a couple of friends who were traveling, to pick them up. 300N, 323 and one 357 were purchased in US, and additional 357 was bought in Germany.

"Dove tails" for quick release adapters and several circle shaped parts made it very difficult for me to make all necessary parts myself. I had to employ services of a craftsman who had all the necessary equipment. It proved to be quite a task to find someone for this, since many weeks passed before I could get my hand on any contact information. Finally I found someone, and gave him all material and blueprint. What was supposed to be two-week build, in the end lasted almost two months, but I finally got all the parts and could assemble the head.

While I was waiting for manufactured parts, I managed to model the assembled head in 3D, and familiarize myself with its intended operation. Also I made the circular scale for angles (opens new window) and several other stickers, and had print them in the local printing shop on a PVC. These were cut, and then sticked to the bare aluminum surface. Result looked quite nice, since the PVC was transparent, and it looked like the print was made directly on the metal.

First thing that came to my mind after the assembly was how small the head was. Weight was quite big (around 2 kilos), but nothing serious. At least it was sturdy and gave impression of stability. Specs were on the level, but finish was so and so. Several parts were nicely finished, and you couldn’t get a cut if you tried, but several others were still quite sharp. 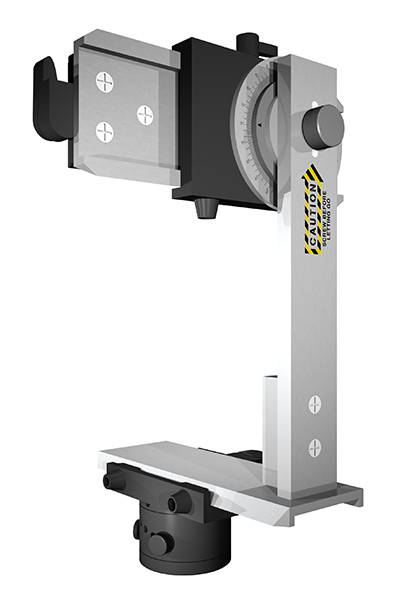 There was a slight problem with the M8 screw that was intended for the altitudinal screwing mechanism. Its head was quite round, and made firm lock somewhat difficult. Fortunately, I noticed that my 804RC2 tripod head has the same screw size (M8) for it’s handles. Since these handles were protruding from beneath the pano head (hence they show up in panoramas), I was already thinking about trading them for smaller compact screws. Smallest azimuth knob from the tripod head did the trick and now I can place my entire hand on it and easily tighten the mechanism.

Second "dove tail" plate I had to be made (used in the altitudinal mechanism), proved to be excess. When I got the Manfrotto parts, 323 quick release system wouldn’t fit proper on the supplied 357PL plate because of two rubber rails on it. I sketched the additional "dove tail" plate to be made, because I planed to drill it and attach the 323 system. However, I left the 323 attached on the 357PL plate (using 3/8" screw), and by the time manufactured parts arrived, they got quite fond for each other 😄 Rubber receded after a while, and 323 is now pretty firmly on the plate. Since Manfrotto’s plate is lighter and of higher finish, I decided to leave it as it is, and keep the other one as a spare.

Arrival and assembly of the head coincided with my purchase of the used full-frame Canon EOS 5D camera. It was quite a leap for me, from the smaller 350D. Now my 12-24mm lens is fully utilized at 12mm and I can make full 360°x180° panoramas from only 2x6=12 shots (x3 for HDR). Bigger 5D fits perfectly on the panoramic head, even with bigger N3 style remote controller attached. After determining correct pivot point (exact center of the lens’ entrance pupil), I was ready to shoot panoramas much easier and quicker.