I have been engaged in amateur astronomy for quite some time (last 12 years to be exact). I’ve been doing this as a member of several astro clubs in the area, but I’ve personally never owned any astronomy equipment (besides photo cameras, if you please). This became apparent when two years ago I had a fall out with my last club, and found myself instrument-less and in a puzzle: how did I manage not to have a telescope of my own in all this time?

Well, situation is a little bit complicated, but in the end, primary reasons for this were a bad personal finance situation, and eventually, lack of real dealers of astronomical equipment in my country. This all changed some two years ago, when finally things started to happen: first, I got a serious job, and second, well I already said about the fall out. For the whole year of 2009 (International year of Astronomy, coincidentally) I’ve never even been near telescope. Finally, in June I had enough, and decided to buy my first telescope.

As a good "base" and in talks with my friends, I decided to get a heavy-duty equatorial mount. My last astro project was in astrophotography, so I figured I’ll be going back to it eventually. Good equatorial mount is essential for deep-sky imaging, because tracking and stability are almost all that makes a difference. Buying one was a little bit of adventure, since the first dealer in country had opened a shop near our northern country border, and had some problems importing one. After several weeks of delays, I finally got it. It’s Sky-Watcher’s EQ-6 mount, with motors on both RA and Dec, very sturdy and heavy-duty. It was not a bargain, but I thought that next step will be easier now.

With a little help from my friends, first I borrowed an ATM Newton ~150/1700. It had great optics, but was suitable only for visual use (it’s a bit bulky). After a few months we were a bit bored. I wanted to try and replicate my last astrophotography setup, which consisted of an mid-sized newtonian for imaging and a piggy-back mounted second instrument for assistance in guiding.

Eventually, I found a used Newton 150/750 in ads, and I bought a new short-tubed refractor 80/400 for guiding. I mounted an old Manfrotto 3-way pano head on Newton using a simple aluminum bar. It has quick release system, so setup should be also quick. It is not ideal option, because whole thing is a little bit wobbly, but it will do until I come up with a better idea.

After a few tests, my friends and me concluded that the optics of the newtonian were quite good, despite it’s low price. Aside from a considerable coma (opens new window), it was pretty sharp and quite usable for APS-C sensor size imaging. This was handy, since I have an old Canon EOS 350D camera laying around, and would be interested in using it for astrophotography.

Sadly, OTA 80/400 was a disappointment on the optics front. Large chromatic aberration renders it simply useless for any visual use, but I’m confident it will do as a guiding instrument. To make matters worse, it came incomplete, so I needed to fabricate extender tube in order to achieve focus. Luckily, local metal workshop helped with this.

Now, next step is putting the whole system together and making a viable amateur astrograph 😉 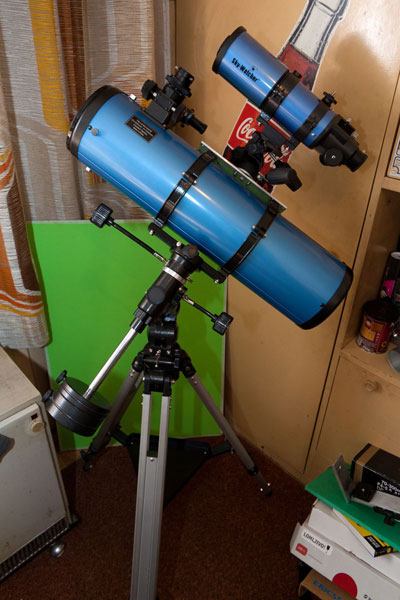